Pare Corporation, with input from the City of East Providence, selected an AWWA D110 Type III Prestressed Concrete Tank for several important reasons. Prestressed concrete tanks are typically built with an exterior coating which is primarily decorative; they do not require cathodic protection and expensive exterior and interior coating systems that require cyclical maintenance. This fact will result in significant savings over the long life of the tank. In addition, the superior aesthetic appearance of a prestressed concrete tank was considered ideal for this highly visible location. Competitive bids for general construction were received on March 12, 2015, and Preload was chosen as the tank builder. 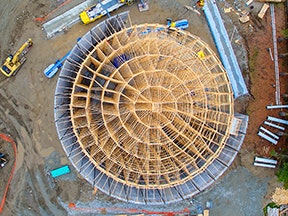 The AWWA D110 Type III Tank currently under construction will have an inside diameter of 112’ – 0” and side water depth of 82’ – 0” with a cast-in-place concrete dome roof. The tank wall system consists of thirty-four (34) horizontally cast, precast concrete wall panels of record-setting length. The massive panels required a special design to protect against bending stresses during the panel erection process. The wall panels are over 83’ tall and weigh 38 tons with rigging. Wall panel erection commenced in April 2016 and was completed shortly thereafter. The panel erection process required a 450 ton primary crane equipped with a superlift and a 90 ton assist crane. The project is on schedule and is expected to be completed by the end of 2016.

From the site in the Kent Heights neighborhood, the tank will command the highest elevation in this coastal community. Preload is proud to work with Pare Corporation and our other project partners to construct a lasting landmark for the City of East Providence.

Although a challenging year caused delays holding our annual Top Tank contest, we wanted to end 2020 on a high note. What better w...

Our exciting announcement is out! Preload has finished the expansion of the Mechanics and Fabrication Shop building. This expansio...

PRELOAD Names Sellersburg, IN Winner of the 2019 Concrete Decision Award, Top Tank of The Year