In June 1999, the roof of an underground concrete reservoir collapsed at the Lake Huron Water Treatment Plant. At the time, this reservoir was the Detroit area’s largest water storage tank. Needing to repair or replace this tank quickly, the Detroit Water and Sewage Department (DWSD) hired NTH Consultants, Ltd., Farmington Hills, MI, to determine the cause of the collapse and to analyze the costs and benefits of the options available.
Turning to design-build delivery for this emergency project, DWSD retained both firms, along with PMA Consultants LLC, Ann Arbor, to first develop an RFP and then provide oversight throughout this project. To save time, DWSD solicited general contractors three weeks before the RFP was published, and identified six local contractors in the proximity of two of the four tank building companies in the U.S. that specialize in constructing large wire-wrapped underground concrete reservoirs.
EBI, Detroit, was awarded a $37.3 million contract as the general contractor, which had engaged engineering firm Finkbeiner, Pettis & Strout, Inc., Detroit, to design the project. The design-build team selected Preload as the preferred tank builder. Preload fast-tracked the design and construction of this underground replacement tank in less than one year. Construction took place throughout the winter. Structural engineering firm Klein & Hoffman, Chicago, also collaborated with DWSD’s design-build team.
This Preload tank has a 24 MG emergency capacity with an inside diameter of 330’ and a side water depth of 37’, of which 15’ is above ground level. Baffle walls, cast off-site, have a double-C configuration. The pile-supported floor has a large 15’ x 21.4’ inlet and outlet channels through the floor. 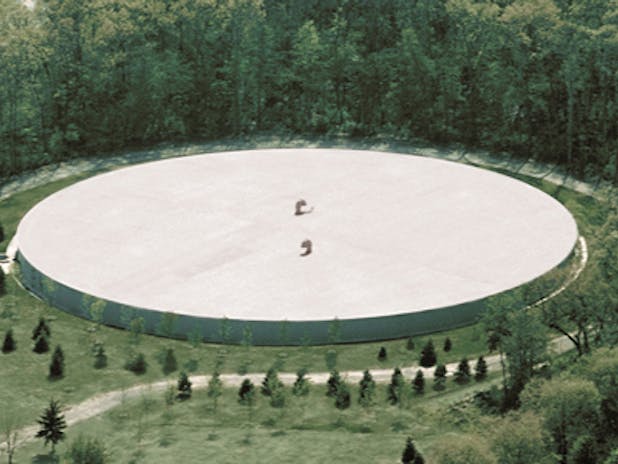